The 50 MMgy ethanol plant located in Lake Odessa, Michigan, sells E85 and other blends at a blender pump located on the ethanol plant grounds. But the company’s newest venture into the retail world is to own and operate two of its own convenience store locations, where it will offer Michigan drivers ethanol blended fuel as well as the snacks and drinks typically sold at C-stores. 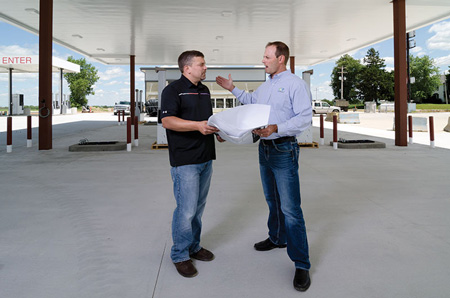 Matt Lee, manager of the NuVu Fuels C-store, left, and Mitch Miller, CEO of Carbon Green Bioenergy LLC, stand in front of the gas station, which is expected to open for business in September. PHOTO: GREEN FROG PHOTO

As was written about in Ethanol Producer Magazine previously, Carbon Green is also part of a small group of ethanol producers that sells E85 directly to area retailers. Carbon Green calls that its Yellow Hose Program, which supplies more than 30 area gas retailers with E85. Direct sales to the consumer are, however, a related but slightly different project Carbon Green took on about the same time. It’s all part of the company’s strategic diversification plan, Miller says.

EPM talked to several ethanol producers selling direct to consumers in Michigan, Nebraska, Indiana, Wisconsin and Minnesota. While there are others, so far, only a small percentage of the industry is in the direct-sales business, whether to gas retailers or consumers. So what’s holding them back? “As producers, we are constantly focusing on inside our walls, and there are opportunities outside our walls,” Miller says, adding that, while it’s a step he believes is worth taking, it does take a leap for ethanol producers to go into other markets.

The E-store
In late July, a newly constructed C-store and gas station was set to open for business in Ionia, Michigan, in September, just seven miles from Carbon Green, Miller says. Branded NuVu Fuels, it will offer drivers E10, E15, E25, E85 and, possibly, E50, Miller said. Gasoline supplier Petersen Oil and Propane is a partner with NuVu Fuels Retail. The ethanol will come from Carbon Green, through its Yellow Hose program.

At about the same time, the company hopes to close on the acquisition of an existing gas station in the Grand Rapids, Michigan, area, he adds. The acquisition was pending in late July. The goal is to reopen that gas station, which will be rebranded as NuVu Fuels as well, by Memorial Day 2016.

There are multiple motivating factors behind what the company is doing, Miller says. First, the goal is to “do our part to take down the blend wall” by increasing consumers’ access to higher-level ethanol blends. Secondly, it’s about educating consumers about the benefits of ethanol. Finally, it’s about promoting a homegrown, domestically produced fuel. “I’ve been in the ethanol industry over 20 years and our main goal has always been to do our part to contribute to energy independence,” he says.

Another example of the direct-sales model was put into place in 2013 by a diversified agribusiness and transportation company. Family-owned Zeeland Farm Services made the leap to selling ethanol blends direct to drivers when the company built a 24-hour travel center across the street from Nebraska Corn Processing ethanol plant, in Cambridge, Nebraska, says Beth Westemeyer, director of Anew Business Development. The 44 MMgy plant is a subsidiary of Zeeland Farm Services, which restarted the idled facility in spring 2010. Ethanol blends sold at Anew Travel Center, including E10, E15, E30 and E85, are blended from ethanol produced across the street.

The close proximity of the two businesses has been mutually beneficial. “We are able to save in many areas and work together to benefit both the plant and the fuel stop,” she said. “Savings on transportation, as well as a direct supply of ethanol, are two large advantages.”

The company considers the venture a great success. “Consumers have taken well to the new business plan of selling ethanol blends as opposed to regular, midgrade and premium,” she says. “As we have continued to educate the consumer on these blends, we have seen an increase in our higher blends. Our E10 and our E85 are the highest sellers, but we are seeing an increase in E15 as well.”

But that’s not the only location where Zeeland Farm Services sells ethanol blends. The company purchases E85 through Carbon Green’s Yellow Hose program and sells it at a fuel dispenser at its headquarters in Zeeland, Michigan. Part of the motivation for both these projects is to educate consumers about ethanol and its benefits. Another aim is to increase market access to the fuel.

On-site Dispenser
Carbon Green’s first step into retail came about two and a half years ago, when it installed an unmanned blender pump on the facility’s grounds, after requests from employees, area farmers and others. The pumps are open for business 24 hours a day to credit card users. There was nowhere to buy E85 and other higher ethanol blends in that area and the requests were coming in daily, Miller says.

Although the thought was that only a few hundred gallons would be sold a day, the reality is that Carbon Green sells about 1,000 gallons a day, and, in mid-July had sold nearly 550,000 gallons in all. The project had a quicker-than-expected, two-year payback period. Also in July, the company eliminated E10 and replaced it with E15.

However, in the situation where E85 is sold in the area, but it isn’t being priced properly, such as was the case at NuVu Fuels managed Iroquois Bio-Energy Co. LLC, selling ethanol blends at the ethanol plant can help correct the market, Miller says. Iroquois Bio-Energy, a 40 MMgy ethanol plant located in Rensselaer, Indiana, was installed this spring and offers E10, E15, E30 and E85. According to an April press release, initial fuel sales were more than 75 percent E85, and E30 was in the second most-popular category.

Badger State Ethanol LLC installed two unmanned blender pumps, one on-site at its 55 MMgy facility in Monroe, Wisconsin, and another in nearby Platteville, Wisconsin, about an hour away. “The purpose was to educate our communities about ethanol blends by letting them use them and see the financial benefits and performance for themselves,” says Erik Huschitt, general manager. “To that point it has been extremely successful. Since all of our blends are ethanol blends, we are very excited to give the community an opportunity to buy local, made local. People in the Midwest are loyal and get that.”

Corn Plus Co-Op & LLLP in Winnebago, Minnesota, has had on-site unmanned fuel dispensers for more than a decade. The company sells E10, E15, E20, E30, E40 and E85 from four blender pumps. Education was the main reason the company imitated the project. “We want to get folks to use higher blends,” says Rick Serie, general manager.

Your browser is out-of-date!

Update your browser to view this website correctly. Update my browser now